Being a PI can be stressful for a variety of reasons, but I love my job as a researcher. There is no greater thrill for a curious mind than asking questions, designing experiments, and figuring out how nature works. Partly inspired by Rosie Redfield, one of my motivations for writing this blog is to relay the fun/not so fun moments of everyday science. In the spirit of openness I'm periodically going to be writing about a little side project that I've got going on in my lab. I actually have no clue where this will go, and at the moment there is absolutely no hypothesis, but I'm curious to see how this turns out because we've found something phenotypically interesting (to us at least). Science is about asking questions after all, and following the biology (currently reading an ASM book dedicated to John Roth, and "Follow the biology" is advice John liked to give to folks in his lab).

So, to begin, one of the bacteria that my lab works on is Pseudomonas stutzeri. The strain that we've been focusing much of our attention on usually makes vibrant yellow colonies during growth on agar plates, and this yellow tinge also comes through during growth in liquid culture (see test tube on left below). From my other work on Pseudomonads, I'm guessing that these colors might be due to iron scavenging molecules called siderophores, but I haven't had time to read a lot about the genetics of color in P. stutzeri, or even find out if tere are things to read. One day my technician picked a single colony from this workhorse strain and grew up an overnight culture. There was nothing particularly special about this colony or the overnight culture, but the next day this overnight culture was placed in the fridge to save for later. My technician later took the culture out of the fridge and, very surprisingly, noticed that the culture was now dark brown instead of the yellow tinge. We isolated single colonies from this brown culture and, sure enough, they continue to turn liquid overnight cultures brown. When colonies from this line are grown on plates, you can tell that the brown color is due to something extracellular to the colonies and which diffuses throughout the agar. Somehow, we were lucky (?) enough to randomly pick the very colony that possessed a mutation leading to an interesting phenotype (the odds are hugely against that). It's also not simply a contaminant...ruled that out already. 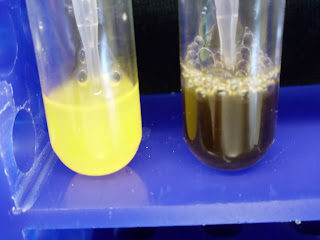 Culture on the left is "wild type" P. stutzeri, on the right is our weird, brown culture isolate

What's the first step of figuring out what this phentoype is (well, the first step is actually blogging about it and seeing if anyone has ever witnessed this before...if you have please let me know). If I were a biochemist I might try to isolate the chemical that's turning the culture brown, do some fancy analysis, and figure out what the composition is. I'm not a biochemist, I'm a geneticist. We like to figure out the underlying genes involved by breaking things and cleaning up the mess. To do this I am going to be using a Tn5 transposon. Transposons are pieces of DNA found widely in nature and can be thought about as chromosomal parasites. Tn5 is a naturally occurring transposon that has been "domesticated" for use in genetics labs. Once in a bacterial cell, it will randomly "hop" or "transpose" into the chromosome of the host. A good metaphor for this is that it cuts itself out of whatever previous piece of DNA it is present in, and pastes itself into the bacterial chromosome. The Tn5 transposon will hop only once into a (for the most part) random section of the new chromosome. Incorporation of the Tn5 will usually disrupt the function of whatever gene it incorporates into. We are going to hop a Tn5 transposon into the brown P. stutzeri isolates chromosome, with the hopes that this Tn5 will disrupt whatever genes are making the culture brown. 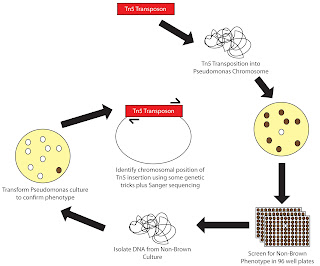 Overview of our Tn5 strategy

The particular strain of P. stutzeri that we are working with is competent for natural transformation in the lab, which basically means that it has the ability to suck up pieces of DNA from the extracellular environment and recombine them into it's own genome so long as there is some sequence similarity. Once we isolate a strain containing a transposon that eliminates the brown phenotype, we want to be sure that the transposon is causative for this phenotype rather than some other unknown mutation. To confirm this, we will isolate genomic DNA from the transposon mutant and transform the original brown strain with genomic DNA containing the transposon. If this Tn5 disruption is causative, we will be able to select for transformants that are no longer brown. Then, all thats left is to figure out what genes the transposon disrupted. We can do this using a few genetic tricks that I'll talk about later, but currently we are still trying to isolate non-brown isolates.