On the ESA letter to NSF

As many of you may know (and many of you may not), there's a draft letter circulating around the ecology/evolution community concerning reforms made to the NSF grant proposal system. Proflikesubstance has been much more on top of this, so for the relevant background please start HERE and work your way back.

First off, I signed the letter. While many (including some of the people I respect most in science) say that the letter doesn't offer solutions, a sentiment I agree with, I do see it as the next step in the debate. This letter gives a formal voice to the "opposition", rather than a bunch of us ragging and complaining to colleagues and the ethos. Some will say it's whiney, but debate is about voices on both sides of issues. Again, I wholly agree that the NSF didn't have a choice since the previous system was unsustainable. There is not as much money going around as we'd like, and there are many more scientific mouths to fill now than before. I think eventually we will reach a point where all sides are content, not happy but content, but it's going to take a while and bits and pieces of solutions from all sides to get to that point. I also think as scientists we are going to need to chip in a little bit more to make the system work, see below, without necessarily getting anything back aside from helping to make the community of peers a better place.

As a young PI, I have a hell of a lot of skin in this game. While I don't have a complete solution to the problem, there are a couple of ways that the system seriously complicates life as an assistant professor and I think these issues could be addressed better. The two main complications in my own experience are the PI limit on submissions and the lack of critique from the combination of pre-proposals plus only one submission round a year. This is maybe my naivety in the situation, but I don't understand why there is a limit. Can somebody in the comments please tell me what this is trying to address? All I can speak from is brief experience, but I've had more than a couple of situations in the last year where those who could act as collaborators with me (and will act as collaborators anyway) have worried about putting their names on my grants because of the limit. These folks are going to help me with the project regardless. When I submit grants on these collaborative projects, I worry that it seems as though my submission and accompanying letters of support don't fully portray the potential success for these projects and don't accurately portray the skill sets behind the submissions. I certainly don't have extensive experience with every single scientific technique or analysis, but when I include experiments utilizing these techniques into my proposals I can't help but think that there is an inherent psychological disadvantage leaving collaborator's names off. This may be a problem only within my own head, but PI's are having to count the number of submissions they are on and worry about prioritizing the limited submission opportunities and this definitely trickles through.

The biggest issue in my own experience is the lack of feedback/critique that young PI's get on proposals. Pre-tenure, we as assistant professors have a set amount of time to make our case that we belong as PIs. This means becoming the best grant writer we can possibly be as quickly as possible, and this only happens with practice. Currently, there is one submission per year to IOS and DEB. From what Proflikesubstance says in the link above it seems like MCB is going to follow suit. I started my lab roughly two years ago, and have roughly 3 1/2 years left until my tenure package is due. Therefore, for the NSF, I've got roughly 3 more pre-proposal submission opportunities per panel. Pre-proposals are not full grants, and this severely curtails the opportunity to go into the experimental details. There is simply no way that I will be able to get the feedback that I would have under the previous system just through the pre-proposals. If you get selected to submit a full proposal, you will still receive half of the potential critique that you will have gotten previously given one funding opportunity per year instead of 2. One of the greatest challenges to starting a lab is learning how to write and sell your grants to a broad audience and developing your ideas. Simply as a product of time on the job, many of your grant submissions and research ideas haven't been vetted as much as those of more established PIs. Every time I've written grants my first two years on the job, they have been made up from scratch. Only now do I have enough submissions under my belt where I can start to distill ideas and pull language from the grants that work while dropping or refining sentences that don't.  I have great mentors here at UA and many more friends at other institutions that have helped, but there is something special about anonymous review that makes these critiques extra valuable for developing grants and research programs (harsh as they may be). Critique from failed NSF research submissions turns into better NSF grants later, but it also feeds NIH/USDA/etc... grants later. Limiting the amount of critique I get from the full submissions by anonymous reviewers significantly affects my grant submissions to all funding agencies. Others may counter with the idea young PIs have the unique ability to submit CAREER proposals and this is certainly true. However, these proposals are skewed much more to teaching and outreach than normal grants (further limiting space for vetting experiments and changing experimental focus) and there's a total limit on the number of CAREER proposals per PI over their eligibility. I was reluctant to submit a CAREER this year (I strongly thought about it just to get reviews back) because I haven't had much time to figure out the best ways to incorporate my research into teaching and outreach...while also thinking that I would have a better chance preliminary data-wise if I waited til my third year. In the end, I didn't think the numbers worked out in my favor given this cost-benefit analysis for CAREER submission this summer but with this decision I lose another chance at critique as a young PI.

The ESA letter is a bit weak on solutions, yes. Barring a good reason for the PI limit I don't see why this can't be raised or eliminated without affecting the system much. Modern science is based on collaboration and we should celebrate this. If there is a "too many submissions from PIs" problem, can't we come to some agreement on how not to exploit the system? Maybe I'm an idealist... As for the critique problem, maybe the solution is having an NSF workshop for young PIs every year that acts essentially as a panel. Young PIs and established PIs could volunteer to act on this workshop panel, where the focus would be on anonymous critique of proposals from young PIs. I've noticed that many young PIs have been encouraged to act on NSF panels, and this provides yet another opportunity (I've volunteered for numerous separate panels thus far, but each had been previously filled). This panel could be timed to provide relevant feedback to pre and full-proposals for the next round of submissions. While no grant money would be handed out, this would provide more opportunities for anonymous critique while also providing a deadline to shoot for and insights into the granting process. It might even be worthwhile if we could get our institutions to buy into these panels as a form of service?

Anyway, my two cents.  I have a great deal of optimism that we can figure something out that satisfies all parties, while agreeing that the old system was unsustainable avoiding just reverting to the comfortable past. The NSF is different than many other negotiations (that's a crappy word for it but two sides disagreeing and coming to the best solution) because program officers are scientists and understand the perils and worries of life as researchers. I signed the letter because it solidifies an opposing voice even if it doesn't go anywhere, but it's a start.
Posted by Dave Baltrus at 8:37 AM No comments:

I'd like to apologize first about how sparse my postings have been, but, starting this blog just happened to coincide with the summer conference season as well as the start of the semester here at U of A.

I thought I'd jump back into this by giving a very brief update on an open science project that I started to talk about a few weeks ago (parts. 1 here and 2 here). Over the summer I had an undergrad working on the project in order to isolate transposon mutants that don't display the brown phenotype. After screening ~1000 independent colonies, I'm sad to say that every single plate looked exactly like this: 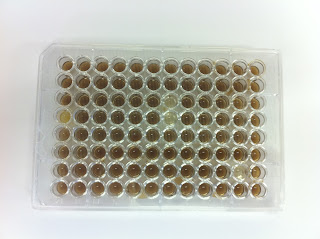 There were always a couple of empty wells where the colonies didn't grow but, eventually, every well turned brown. Astute readers may point out that well A4 doesn't look so brown (hence why I have this picture lying around). However, even this well turned brown after an additional day of growth....and every single colony isolated from that well (~20 or so) turned brown so the late browning wasn't just contamination. Of course, it's possible that whatever pathway leads to the brown phenotype is essential for cellular growth so that mutations would never be identified from a transposon screen. 1000 colonies isn't enough to make a case either way, but it's enough to begin thinking about the next step.

Now that the summer is over, the talented undergrad working on that project has moved on to grad school in another department so I hesitate to devote much more time to the transposon hunt. While it's possible that I could eventually isolate a non-brown colony, there are better uses of my time right now. It was worth a shot but this is a point in my own brain where I cut bait and try a different strategy (especially when the undergrad has moved on to another department). So now I'm going to isolate some genomic DNA from this mutant and sequence the genome in order to identify any potential genotypic differences. We'll see how that goes.
Posted by Dave Baltrus at 4:57 PM 6 comments: