One of the most difficult things to do in life is to admit that you don't know something. Along those lines, it also very difficult to stumble through learning things (and to make mistakes) in full view of the public. I'm about to do both, but hopefully this process is useful to someone out there. Also, feel free to chime in and tell me where I'm making huge mistakes.

Like many of you I've been following the sequencing developments from Oxford Nanopore pretty closely, and the results have been awesome so far. I'm excited to get a MinION and start playing around with collecting data. However, the first step in the process is finding a computer that actually meets the minimum specs to run a MinION (found here). The most important parts of this (at the moment) are that the machine must run Windows 7 or above, have a solid state hard drive that's big enough to handle the data coming off the machine, have 8Gb of RAM, have an i7 chip, and have a USB 3.0 port. Well, the only windows machine that my family owns is my wife's work computer (it's got the specs but there's no way in hell I'm messing with anything on that machine, out of fear). There are also a bunch of other folks who have reconfigured their other non-Windows machines to run windows, and while I could do that I wanted to take a different tack. So, my goal was to try and build a machine that meets the MinION specs while spending the least amount of money possible. Here goes....

I have hardly ever opened up the case on any of my computers before, and I would equate (at the start) my knowledge of what's inside a computer to "6 year old that is curious about how to make their gameplay better". Luckily, there are a ton of different forums, videos, and websites to guide you through every step of the way. Just know that no matter how much you learn, there are many 8+ year olds out there that can run circles around your computer building skills. I'm cool with that, I just want to build something that can sequence DNA using a USB stick.

First step was to survey the field and figure out what I needed to do. It turns out that Dell and HP build a lot of machines with decent processing power for business purposes that don't really have all the bells and whistles that other computers have. Since (I'm guessing) that these are all bought by businesses and then sold after a few years, it turns out that there are A LOT of these machines that you can buy refurbished. I didn't want to build a computer from scratch (too much of a leap), so I thought it might be good to find a refurbished tower that I could upgrade in other ways to meet the minimum specs. Things I looked for: 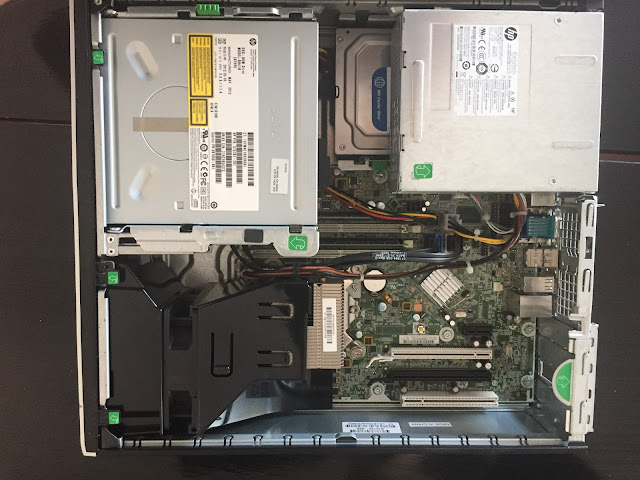 Next step was to buy a USB 3.0 upgrade, and there are a variety of different versions. If you go with the machine above, you want to be able to fit it in an SFF case, and so you want one that has a bracket for "Low profile" machines. Found one on Newegg for 10$. This comes with the driver you need to load it onto the machine (and which apparently worked the first time), and fits right into the PCIexpress 1x slot. One problem that I didn't anticipate, is that you need to provide power to the USB3.0 ports outside of the PCIexpress slot (on the version I bought this is supplied through a 15 pin SATA connection). There apparently are various ways to wire this, but the refurbished computer already had a splitter going to the DVD drive so that all I needed to buy was a 15 pin Male to 15 pin Female SATA connector (here) for 5$, and Voila! Not sure if this works yet, still waiting for delivery.

Last couple of steps are upgrading RAM and the solid state drive. The RAM is easy, the HP machine I bought has four slots for RAM, and you can buy this on Crucial.com (Crucial will even scan your machine beforehand to make sure the RAM fits). I didn't wan't to go overboard, so I bought 2xGb of RAM from them for 83$. I *think* that RAM works better when it's paired, so that's why I bought 16Gb total, but you might be able to get away with 8Gb if you're going minimum specs. Those basically just snap into the RAM ports on the machine. Easy Cheesy.

Last thing was to buy a solid state drive. Again, I went to Crucial.com and ordered a 500Gb drive (you can supposedly get away with 250Gb with the MinION, but I was advised that bigger is better in this case). Same deal, you can scan your system and make sure you're getting the right part and then order. That drive was 150$ total. When the drive came, I detached the SATA wires from the DVD port and connected them to the drive itself. Then I used this handy step by step guide to clone the original Windows 7 running hard drive to this new solid state drive, then unplugged both hard drives and swapped connections (and took the old hard drive out). Last step was to start the machine up again and, DAMN, it felt good when that machine booted itself up after I swapped hard drives. The SSD doesn't quite fit well in the case, although as long as I don't move it it should be OK for now. Looking for solutions for that in the future.

So there you go, a dedicated machine that can run an Oxford Nanopore MinION (in theory) for about 500$. I'll let you know in the next post whether it passes the basic spec tests before I actually burn in my MinION.